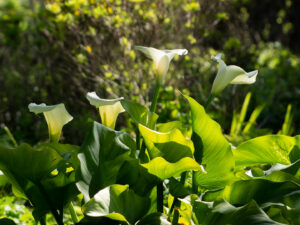 These beauties can be found in the Indigenous Garden
This very well known plant grows freely in damp ground but also tolerates normal garden conditions. The arrow-shaped leaves are as long or longer than the flowering stem and are a lush-looking dark green. The flowers are enclosed in a large spathe (which is a large sheathing bract enclosing the flower cluster) in which the yellow spadix (i.e. a spike of minute flowers closely arranged round a fleshy axis) can be found. Z. aethiopica is strikingly beautiful and commonly used as cut flowers. 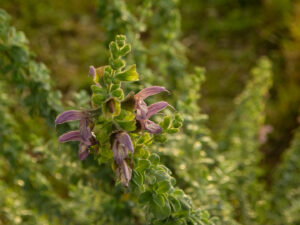 In full bloom near the Water Pump

This soft, grey-hairy shrub found naturally on the sandy flats in the south western Cape and is very well known for its aromatic as well as medicinal uses. While the leaves are greenish on the top, they are covered with grey hairs and glands on the underneath, which makes them strongly aromatic. The flowers appear in whorls in racemes, mauve to pink or blue with a silky calyx. It is cleverly designed to spread nectar onto the backs of bees when they land on the lower corolla. The seeds can be found inside the calyx, they will remain attached to it until the flower drops to the ground, falling out when mature.

Salvia comes from the Latin, salvere, meaning to save or heal, referring to the healing properties of these plants. The species name, africana, means of or from Africa.

Salvia africana was one of the first plants to be used medicinally by the Dutch at the Cape, who used it instead of sage.Felicia amelloides – 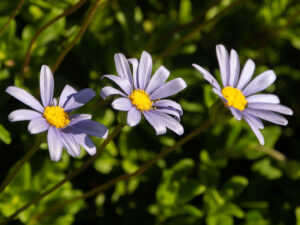 These daisies are under the Milkwood tree at the Harbor Entrance
This shrublet is normally perennial and evergreen, much branched and carries strikingly beautiful solitary flowers which are blue with yellow disc. The leaves are opposite and almost elliptical, dark green on top and light green underneath. 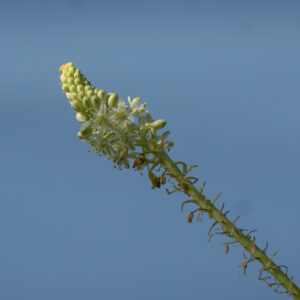 In full bloom around the bench in the Indigenous Garden

This succulent bulb is commonly known as the pregnant onion due to the fact that it does look like a pale green to yellow onion sitting on top of the soil – growing up to 10cm in diameter – and also because it “makes babies” on its side. The long, pendulous, evergreen leaves can reach up to 15 cm in length and droop to the ground. The mature mother bulb produces a single tall, dense raceme of starry flowers which are white with pale stripes of green up each petal.

Caution: the sap can cause inflammation of the skin and most parts of this plant are considered toxic to humans.