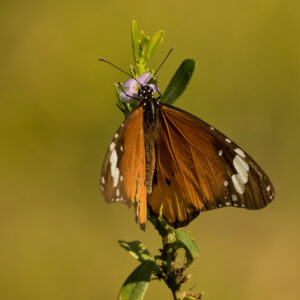 EASY TO IDENTIFY
The monarch is a medium-sized butterfly with a wingspan of about 8cm.  It has a black body with orange-brown wings.  The forewings have a black and white band on the outer edge.  Two black spots on the inside surface of their hind wings distinguish male Monarch butterflies from the females.

DIET
Butterflies have a long, curled-up tube called a proboscis which forms the mouth. The proboscis functions much like a straw and is used to drink nectar, a liquid high in sugar, that makes up its dietary requirements; it also acquires minerals obtained from water for egg production and metabolism; this function is called ‘mud puddling’.

The adult female monarch butterfly lays tiny eggs covered with a sticky substance on the underside of milkweed leaves, which are extremely toxic. The caterpillar hatches from its egg several days later and survives on these milkweed leaves.

The monarch caterpillar and adult butterfly retain the poison from the milkweed leaves in its body, thus protecting it from being eaten by predators such as birds. 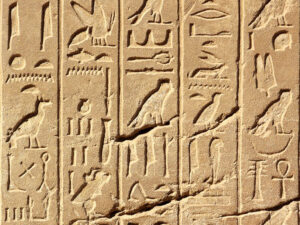 The monarch is believed to be the first butterfly ever to be documented.  Ancient Egyptians drew pictures of butterflies on tombs as far back as 3,500 years ago and these images resemble the monarch.

All butterflies, monarchs included, taste with their feet.  They have taste receptors on their feet which help them to identify their host plant.  The butterfly will ‘stomp’ on the leaves to release plant juices.