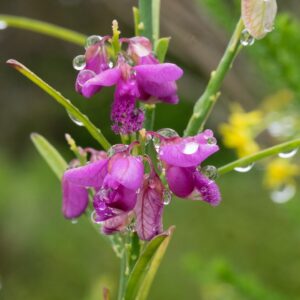 A new evergreen shrub recently spotted in Steenbok.  If left untouched, it can grow to over 2m. The specimen in Steenbok is only about 70cm and can be seen alongside the footpath on the opposite side of the Indigenous Gardens.

It will definitely catch your eye with its almost bare stems drooping slightly under the weight of the striking purplish-pink flowers. 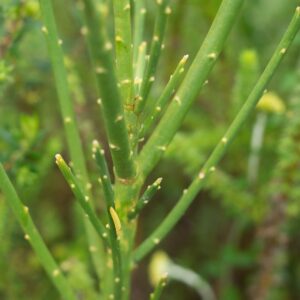 The bare stems are due to the fact that the simple and narrow alternate dark leaves tend to fall off before flowering, leaving the stems covered in white scares (picture left) where the leaves once were attached.

Even though the flowers resemble those of the pea family, they are very different: the lower keel-like petal has a brush-like tuft on it which isn’t the case for the plants in the Fabaceae family. The other major difference is that the Polygalas do not bear leguminous fruit but their seeds are enclosed in papery, flattened capsules which remain on the bush for some time during and after flowering.

The name Polygala is derived from classical Greek polys which means much and gala meaning milk, so named because the plants were believed to enhance milk production in livestock. Virgata might relate to Virga (Latin for “branch” or “rod”) which could be an emphasis on the bare branches during flowering.