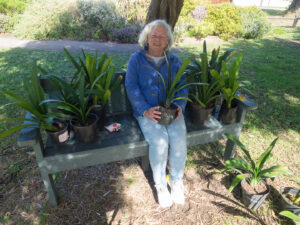 A huge thank you to Penny Lennon, a long time Friend of Steenbok, who has generously donated 18 clivias for the Main Entrance Gardens in Steenbok Nature Reserve.

Penny started propagating her clivias soon after she purchased her first one at the Leisure Isle Festival back in 2008. Since then she has managed to grow many different species and colours of these beautiful plants.

The Friends of Steenbok are very grateful for the kind donation and visitors will be eagerly awaiting the display of these colourful flowers this Spring.

The genus Clivia is named after the Duchess of Northumberland, Lady Charlotte Clive.

The world’s love affair with South Africa’s clivias began in the 1800s when specimens were sent back to England from Kwazulu-Natal. In Victorian times this beautiful plant was very popular for indoor use in England and Europe. The discovery of the yellow-flowered Clivia miniata (C. miniata var. citrina) in the late 1800s fuelled an interest which still persists today.

Part of the fascination has been with the breeding of clivias, both amongst the four species (C. nobilis, C. gardenii, C. caulescens, C. miniata ) and between forms and colours within the species. Breeders select specific traits in each generation to produce pronounced qualities such as huge, broad petalled flowers, red, yellow or apricot coloration, broad leaves, fan-shaped leaf arrangement, variegation, dwarfism and many others.