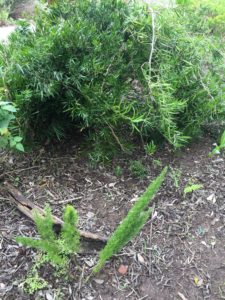 These two Asparagus (picture on the left) can be seen, literally next to each other across from the Indigenous Garden path.

Whilst the vigorous, robust & somewhat scary looking Asparagus falcatus would tend to want you to move along, the cute fluffy cat’s tail like Asparagus densiflorus “Meyerii“ is calling you come closer & take a look at her. 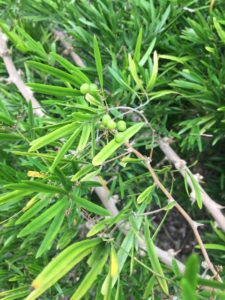 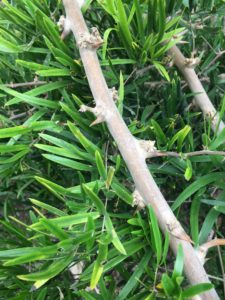 A.falcatus or large forest asparagus  – as it is commonly known, is a tall evergreen climber with pale grey stems bearing short but strong, hooked thorns that cling onto neighbouring plants to reach sunlight. The white, star-shaped and fragrant flowers appear in elongate inflorescences, often in profusion and are followed by red berries.

As you can see from the two pictures on the right, this specimen in Steenbok has been “contained” and its dense foliage + extremely sharp thorns, whilst still on full display are fairly safe to the public.
Facing this somewhat giant of an asparagus, you will discover… 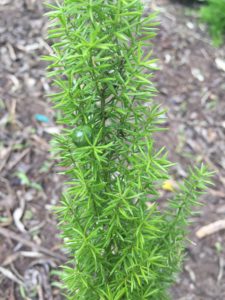 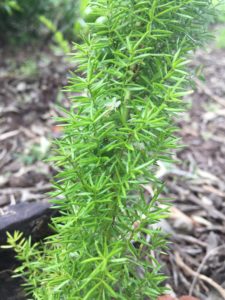 A.densiflorus “Meyerii“ or cat’s tail asparagus. This plant is not indigenous to the Garden Route but found naturally from Eastern Cape to Mozambique.

It is a beautifully erect plant with cylindrical branches which are slightly curved at their tips (looking like a cat’s tail), and densely covered in bright green, short, needle-like leaves.

The flowers are small, white, star-shaped and fragrant. They appear in elongate inflorescences and are followed or even sometimes accompanied by showy red berries.