Whilst walking in the salt marsh area of the Northern shores of Leisure Isle, particularly those of Kingfisher Creek, you might want to stop and take a closer look at some of its flora. Even if the small patch does not look like much, it can reveal some pretty lovely specimens…. 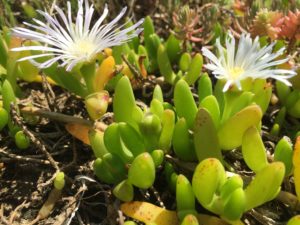 This annual or short lived perennial plant is fairly prostrate with succulent leaves which are opposite each other or in clusters. Rooting at the nodes makes it a great plant for soil stabilising. The leaves are more or less cylindrical, 2 to 5cm long and 4 to 10mm thick with warty margins and blunt tips.  The flowers can be purple, pink or white with many ‘petals’, solitary at the ends of short branches. 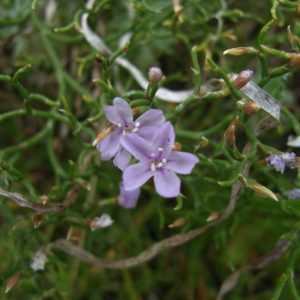 This tufted dwarf herb has narrow (1 mm broad) branched leaves (3 to 6 mm in length) from stem on woody base but can also be defoliated in tidal areas. Spiklets of light purple flowers, 5 mm diameter with 5 petals have started flowering and will do so until  May. This species flourishes in saline soil and is therefore very much at home in Steenbok’s salt marsh. 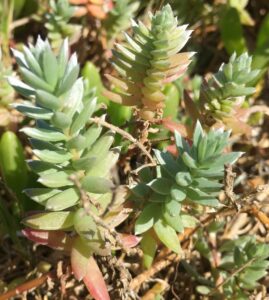 This prostrate, spreading, mat-forming perennial succulent succulent has low straggling stems growing horizontally with upright branches and grey/green fleshy leaves which have a velvety texture. They turn to bright shades of orange and red the older they get. The flowers are very tiny, yellow and appear in January and February.

Interesting facts: halophytes plants such as the Soutbossie are characterised by a higher tolerance for dissolved dry solids in the water they use, or by the ability to avoid the salt around them. Most plants are not salt tolerant, called glycophytes and are easily damaged by much salt in the water.