Skip to content
« Back to News
The Friends of Steenbok Nature Reserve thank the SANParks Rangers for their hard work and dedication in keeping the Knysna estuary an environmentally sound area. 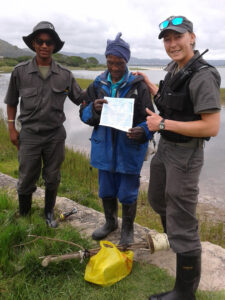 It was good to see the Rangers operating at Kingfisher Creek recently, and heartwarming to see the friendly relationship that exists between them and the fishermen.

Rangers Leam Phillips and Jene Conradie spent time conversing with the local fishermen and informing them of the fishing laws.  It was encouraging to hear from them that most fishermen are cooperative regarding these laws.

After the diggers have been at work the mud-banks end up looking like the surface of the moon, with huge circular craters dug out with spades and forks.  This is not a pretty sight, and it destroys the whole habitat in which bloodworm, pencil bait, prawns and a myriad of other creatures live.

Furthermore, research has shown that it can take the affected estuary mud-bank more than two years to fully recover from one night’s worth of illegal bait collection. That means two years’ less bait in that particular area for grunter, kob, steenbras, stumpnose and other species entering the estuaries to feed, as well as for a host of bird species which depend on finding food on the mud-banks during low tide.

Kingfisher Creek on Leisure Island is one of the hot spots in Knysna that the Rangers frequently patrol.  They found two thousand illegally collected mud prawns and a garden fork during a low tide morning patrol!  In the past year the Rangers have successfully issued 18 fines and two arrests made.  There has also been an increase in the number of fines paid.

HOW YOU CAN HELP