This species was previously known as Salvia africana-lutea, however, according to the rules of botanical nomenclature, hyphenated names should not be used.
The first part of the old species name, africana, means ‘of Africa’ which is the plant’s origin and the second part, lutea, means ‘golden’. This has now been replaced by aurea still meaning ‘golden’.
The name Salvia is derived from the Latin ‘salvere’ meaning to save or heal, and refers to the medicinal properties of some species. 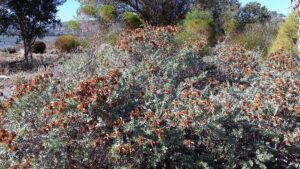 This shrub is easily recognisable in Steenbok at all times of the year but more so at flowering / seeding times.
Firstly because of its size – they can reach 2m and is very fast growing. They are used as a pioneer shrubs, often being the first to appear after a fire. They are also able to protect more tender species from fires and harsh conditions once they are big enough. They are resilient and rewarding shrubs able to withstand harsh conditions.

Secondly because of its colour – soft silvery-grey leaves, which are aromatic are growing from woolly stems, bring a lovely colour contrast to the park.   Thanks to its thick-ish leathery leaves, it can retain water and therefore does very well in our hot climate. 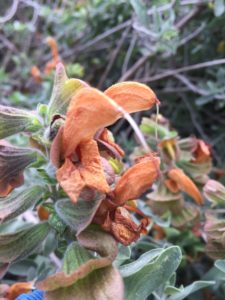 Thirdly – picture left – because of its striking flowers. They are bright yellow to begin with but they soon fade to rusty-orange colour and will finally finish in a reddish brown shade. They are sweetly scented and contain a lot of sweet nectar which attracts bees and moths. The flowers also provide an essential food supply for sunbirds particularly when proteas are not flowering. 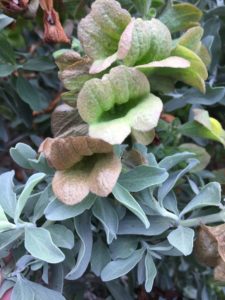 Finally – picture left – because of its seed pods. After the petals fall off, the saucer-like calyx become inflated as the seeds mature, they turn papery with age. Once they have totally dried, they will be either taken by the wind or will fall to the ground propagating itself. The seed pods remains as an added attraction to this shrub as they last a while and are fairly funky looking.