There are quite a few places in Steenbok Nature Reserve to enjoy this pass-time. 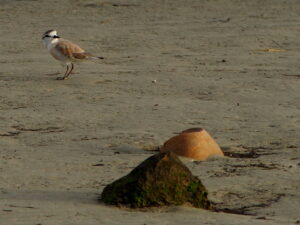 Land’s End is a perfect place to sit quietly and watch plovers moving quickly along the water’s edge.  Plover, White fronted, are occasional visitor to Leisure Isle.  Most white fronted Plovers show a conspicuous brilliant white triangle covering the forehead, has some black separating forehead from fore-crown, upper body parts with rusty wash, legs grey.  Grey herons are usually spotted near the harbor entrance or perched on the signs in Kingfisher Creek.  Heron, Grey, are common in shallow water, usually solitary.
They are described as large and slim, with black, white and grey markings. 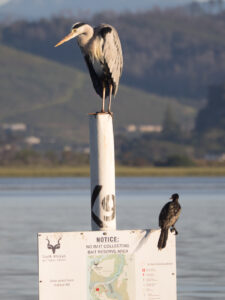 A early morning walk along the Tow Path rewards one with flocks of cormorants flying low over shallow waters.

The Reed Cormorant is a small, long tailed, dark cormorant with a short bill.  Juveniles are fully white below.  Seen in the channels around Leisure Isle feeding in the water and resting on the mud banks.  Reed Cormorants inhabit most freshwater habitats, with the exception of fast flowing rivers, preferring quiet, sheltered, shallow and well vegetated water bodies where they hunt underwater, primarily for fish as well as frogs, crustaceans and molluscs, either singly or in small groups.  They often rest with wings outstretched to dry. 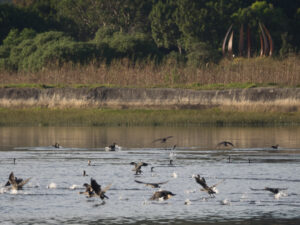 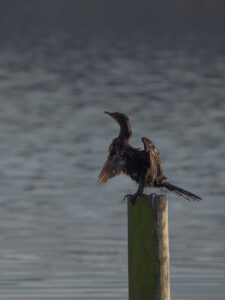