This sweet scented, floral tree, donated by Jeremy and Anne Allan is in memory of Cherry Bullard.  John Moll from Roots to Shoots assisted with the placing and planting of this beautiful tree. 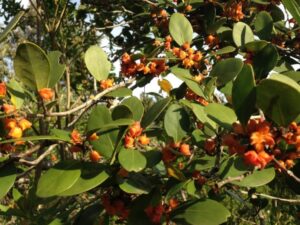 Cherry’s brother Jeremy explained that planting a tree at Steenbok was something that Cherry would have approved of, giving something back to a place that she loved so much.  Jeremy went on further to say that he hoped it would also provide a place for her friends to remember her in their own way and in their own time.

Cherry was an inspiration and touched many that came to know her, not because she had been struck with polio as a child, which left her with a signature caliper and walking stick, but because she had the gift of genuine interest and compassion for those around her and an infectious zest for life. She would go the extra mile for anyone, or anything, spinning like a top along the way.

Steenbok was an inspiration for her.  She would often stroll the park in the evenings, stopping to chat to anybody and share a laugh.  It was a place that she came to love.  She emulated the feel of Steenbok with her own patch of garden, where, on a mini-scale, she cut paths through the natural grasses, sited her own garden bench and sought to match indigenous planting with bird and animal life. Friends from the Bird Club helped her identify her trees and shrubs, which she painstakingly staked and labeled, delighting in being told that the garden harboured fringe, indigenous forest. It became her space, where she could take pleasure in the creation of another little patch of wilderness.