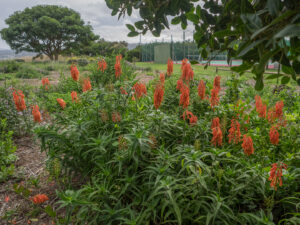 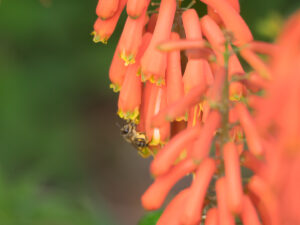 It was previously called Aloe ciliaris var. ciliaris  but along with other small shrubby scrambling aloes has been moved to the genus Aloiampelos.

According to Dr G.W. Reynolds, Aloiampelos ciliaris var. ciliaris was first collected by John Burchell, a well-known English traveller, on 9 Oct. 1813 in the Port Alfred District. It was named  Aloe cilliaris var. ciliaris by the succulent plant botanist, Adrian Haworth in 1825. Molecular research has lead to the recent name change.  The specific epithet ciliaris pertains to its marginal teeth arranged like an eyelash and extending right around the base of the amplexicaul leaf.

Their recurved leaves act as hooks, allowing the plant to anchor itself in thick vegetation.  This rambling aloe is indigenous to the Eastern Cape and is in full bloom west of the tennis courts.  The bright orange-red flowers are pollinated by sunbirds.