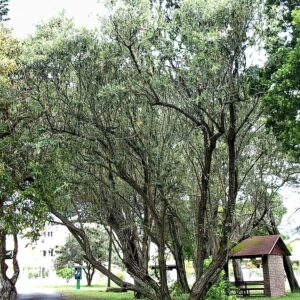 Indigenous to the Eastern Cape and KwaZulu Natal the Broad-leaved Camphor Bush occurs on forest margins and in wooded ravines. Its hardwood is yellowish brown, hard and durable with a camphor scent. An example is growing on Links Drive near the public telephone.