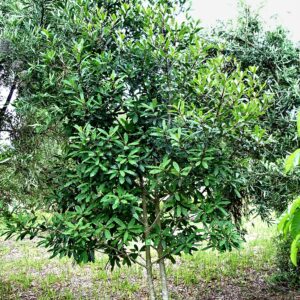 Boekenhout, as it is often called, is a medium to tall tree with a single trunk that branches down to form a fairly narrow, cone shaped canopy. Young leaves and twigs are purplish-red, and the leaf-stalks are dark purple. The star-shaped flowers are crowded on the twigs and may be present at the same time as the fruit which grows on a short stalk and ripens from green to purple.