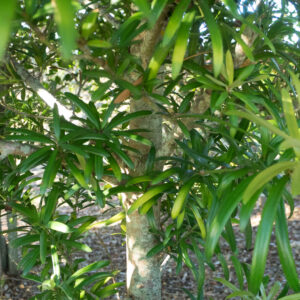 The real yellowwood is one of South Africa’s most valued timber trees and is also South Africa ‘s National Tree.

It  is a slow-growing, usually large, evergreen tree, which grows to between 20 and 30 m in height. There are time when the tree does not grow more than 2m but it still looks very old and full of character.

The wood is yellow and quite similar to Afrocarpus falcatus, the Outeniqua yellowwood, but it is not as dark or of the same quality. The bark is grey-ish and smooth when young but shows the cracks length wise as it gets older causing the bark to peel off in strips.

The glossy green leaves are long and narrow (much longer than Afrocarpus falcatus). The new leaves at the tips of the branches are a very showy pale green or bronze colour.

There are male and female trees. The male cones can be seen from July to September and look like catkins. The female tree in comparison has round, grey/blue seeds on thickened, fleshy, stalks, which as they get older, turn purple normally from December to February.

This tree is a protected species in South Africa. Its timber was very much sought after which caused the species to be almost depleted in some areas. The scarcity of this tree also explains why the real yellowwood furniture are so expensive.