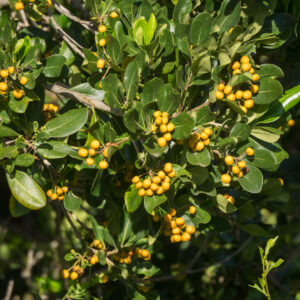 Pittosporum viridiflorum varies in size from a shrub of about 4m in height to a large forest tree of up to 30m.  The bark is pale brown to greyish with distinctive white dots (lenticels). The leaves are usually wider above the middle, dark green and glossy.  Small, greenish-white, sweetly fragrant flowers are produced in early summer (November to December). They are followed by small, yellow-brown seed capsules. This plant is very showy when the capsules split open to release numerous small, shiny, orange-red seeds, which are covered in a sticky, resinous exudate. This cheesewood is often confused with the white milkwood (Sideroxlon inerme).

The name is derived from pitta,  meaning ‘pitch’, and sporum, meaning ‘seed’, referring to the sticky seeds. The species name viridiflorum means ‘with green flowers’.

the name kasuur is a contraction of the Dutch word kaarsuur, meaning candle hour, which refers to the time the flowers exude their sweet fragrance.

Many birds, including the Red-eyed Dove and several starlings eat the seeds.