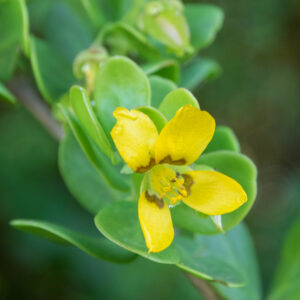 Description
Zygophyllum is derived from the Greek words, zygos, meaning joined, and phyllon, meaning leaf, referring to the paired leaves of many of the species.  This many-stemmed dwarf shrub usually grows to a height of  ± 1 m to ± 1.5 m. Sometimes the plant stems will climb into or over plants and branches that are nearby.

Flowers
The flowers have four or five delicate yellow or white petals that often have red markings.  The petals are free and can have three unique shapes such as broadly obovate (egg-shaped), spathulate (spoon-shaped) or elliptic (oval-shaped).

Leaves
The leaves are considered to be fleshy, having bifoliate (two leaflets) characteristic and the leaf structure is simple and opposite.  These plants are known as xerophytic leaf succulents as it indicates that this plant thrives under dry conditions. This is supported where the leaves would drop off from the plant under conditions that are unfavourable.

Fruit
The type fruit that occurs with this species is considered to be a capsule.  Each locule (chamber) of the fruit ovary will contain seeds where their abundance might be from few to several.