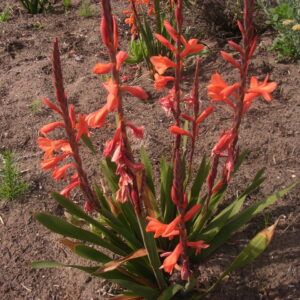 This plant is one of the smaller members of the Iridaceae family (30 to 40 cm tall) and can be found growing on the bank in the Indigenous Garden.
The leaves are glossy, sword-shaped with lightly thickened margins, mostly 6-15mm wide and about half as long as the plant. The flower grows from corms which produce erect spikes of showy flowers which vary from pink to purple or orange.
The genus Watsonia has about 52 species and is centred in the south western parts of Western Cape but extends into Namaqualand, and is also found further north in southern KwaZulu-Natal and on the escarpment in Mpumalanga and Swaziland.