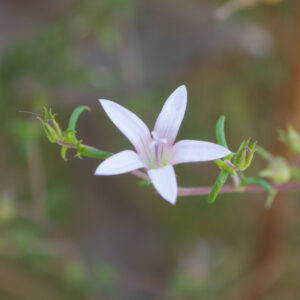 The Wahlenbergia thunbergii species is a shrub from the bellflower (Campanulaceae) family.   The growth form of this species is considered to be a herb in this particular genus, the leaves are usually alternate, no presence of stipules and simple.

The structure of the flower of this genus is bell-shaped with small lobes that are spreading and also the presence of a corolla with a tube that is narrow.   In general, the flowers are borne singly.

The type of fruit that this species bears is a loculicidal (divide locule into parts of two) capsule that is dry.

The main habitat that this particular species prefers to be situated in is Albany Thicket.  The species can be found along deltas, rivers, floodplains and stream terraces.

Since this species is part of the Walenbergia genus, they are considered to be popular ornaments for gardening and also this particular genus only occurs in South Africa.  It is also known for this plant to produce oxygen.