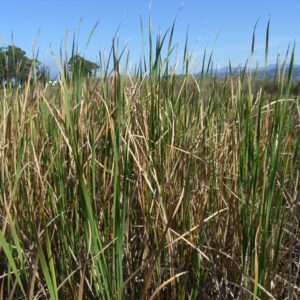 This leafy aquatic perennial grows in marshy grounds and isfound in the Park in the westerly wetland area. It is a monoecious plant which has the reproductive organs in separate structures but borne on the same individual. It tends to spread quickly by means of creeping rhizomes.

The leaves are as long, or longer than the flowering stem. The male (yellow) and female (brown) flowers are on the upper portion of the same spike. The male flowers fall off after pollination whilst the female brown flowers persist for some months finally dispersing seeds when ripe.