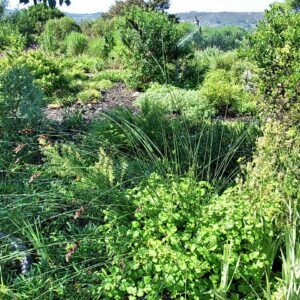 This is a dioecious (meaning the male and female reproductive organs in separate plants) tufted perennial, reed-like and tall. It is a stunning accent plant especially in late summer when the golden-brown inflorescences are at their showiest.

The seed comes in the form of a tiny nutlet found inside the old flower, which by this stage has developed two small wings which help the wind to disperse them.

These large tufted restio thrive on Leisure Isle although its traditional area is from the coastal forelands from Bredasdorp to Riversdale-especially in the sandy flats and the limestone hills. It is widely used for thatching of roofs where it is now more popular than Chondropetalum tectorum.