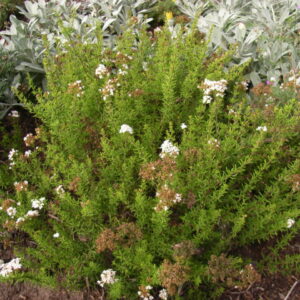 This densely leafy perennial shrub has pubescent branches (meaning, they are covered in short hairs or soft down). The leaves are light green, narrowly linear with the edges rolled under and are clustered in the stem axils. The flowers are small and white on short spikes. They appear in rounded corymbose panicles which is an inflorescence that has the flowers growing in such a way that the outermost are borne on longer stalks than the inner, bringing all flowers up to a common level.

The word corymb is derived from the Ancient Greek word korymbos meaning “bunch of flowers or fruit”.