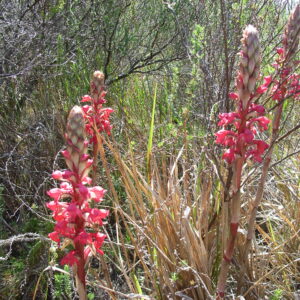 The rootstock of this deciduous, winter-growing geophyte is a root-stem tuberoid: a storage organ which consists of both root and stem tissue. Two broad oval leaves lie flat on the ground while the tall erect raceme shows off the flowers.

This ‘gem’ of Steenbok Nature Reserve grows among dune-bush vegetation and coastal fynbos in the area west of the tennis courts.

This terrestrial orchid was once fairly common and grew on south-facing coastal dunes between Wilderness and Port Alfred. However, it is now listed in the SANBI Red List as ‘vulnerable’, and faces a high rate of extinction in the wild.

Careful clearing of the dense Kingfisher Creek coastal bush in the last few years has resulted in an increase in the number of blooms.