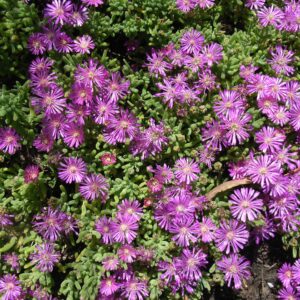 Plants in the Ruschia genus are among the most striking, versatile and diverse of all succulents in the Mesembryanthemum group. Imported from the Karoo, it provides a splash of colour as one approaches the indigenous garden in the Park. Members of Ruschia are all very floriferous; flowers literally cover the entire plant. Flowering takes place throughout the year, reaching a peak in the autumn and spring. These flowers are diurnal (meaning they open during the day) and sweetly scented; the leaves are often bluish green & three-sided, they may bear teeth along the edges, and are nearly always stippled with darker transparent dots, which is an interesting feature in the genus.