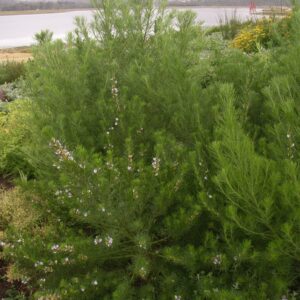 Found naturally in the extreme Western Cape. Usually has a slender stem that branches fairly low down and has angular branches.

The leaves are resinous and release a slight scent when crushed. The genus pinnata(Latin)  describes the pinnate leaves. The pea-flowers are borne at the ends of the branches, clustered in the angle between the stem and the leaves. Interestingly enough, there is only one seed per pod.

Some examples can be seen in the Indigenous garden.

The genus name Psoralea relates to the Greek word ‘psoraleos’ meaning warty or scurfy, in reference to the dots or warts on the bark.

The “P” in Psoralea is silent and the name is pronounced as if it begins with “s”.