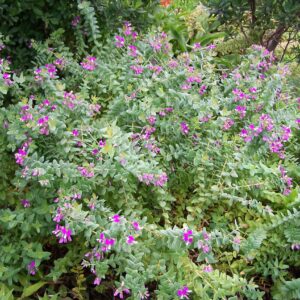 This is a neat, rounded evergreen shrub with young leaves that are tinged with purple, the shade echoed by the deep purple, winged flowers. These flowers are very striking and even though they resemble those of the pea family, they are very different: the lower keel-like petal has a brush-like tuft on it. The other major difference is that the Polygalas do not bear leguminous fruit but

their seeds are enclosed in papery, flattened capsules which remain on the bush for some time during and after flowering.

Bees are particularly attracted to the nectar that the flowers produce and are the main pollinators.

The name Polygala is derived from classical Greek polys which means much and gala meaning milk, so named because the plants were believed to enhance milk production in livestock. The specific name fruticosa means shrubby or bushy in Latin.

Many people are familiar with the hardy coastal shrub, Polygala myrtifolia  which is useful addition to indigenous gardens. Kirstenbosch staff have now selected a form of Polygala fruticosa, a similar species, which makes an even better garden plant. This selected form has been given the name ‘Southern Shores’.

The original plant was found growing out of rocky fissures so close to the sea that the plants were being splashed with salt water at high tide.