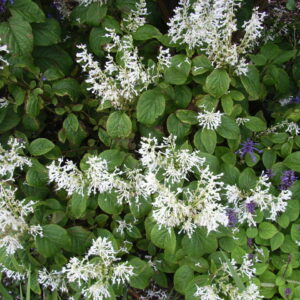 A large straggling, perennial shrub which grows well in deep shade where the purple or white whorled sprays of flowers show up against the dark undergrowth.

The large, ovate to elliptical leaves are arranged in opposite pairs on a square stem. They have an unpleasant smell when crushed.

Found naturally in the forests of Knysna but is also happy in the entrance gardens of the Park under a Rhus lucida.

Plectranthus comes from the Greek plektron meaning a spur and anthos, flower; referring to the spur that is found at the base of the corolla tube of the type species for the genus. It is thought that Ecklon sent seed of Plectranthus to Baron Von Ludwig in Cape Town. It was the first plectranthus to be introduced to Kirstenbosch and has been growing there since 1914, shortly after the Garden was established.