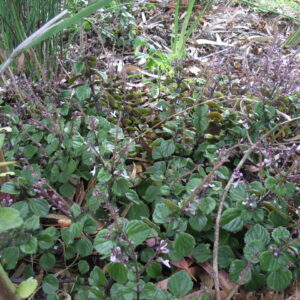 This plant is a perennial groundcover with spreading habits. The hairy stems root freely at the nodes while growing along the ground. The leaves are covered in thin hairs, ovate and have a wrinkly appearance. The flowers are densely packed in a terminal flower head and are very striking.

Plectranthus comes from the Greek plektron meaning a spur and anthos, flower; referring to the spur that is found at the base of the corolla tube of the type species for the genus. The species name ambiguus means uncertain, because botanists initially struggled to classify it, placing it in another genus.