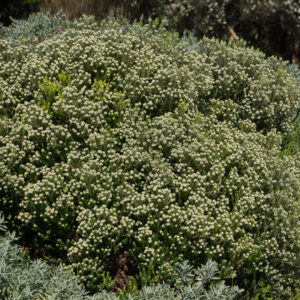 This is a tough, much-branched, bushy evergreen shrub  that can flower all year around. The leaves are needle-like and closely set. The showy white flowersare fairly small but tightly packed into wide rounded capitula (heads) and have a fairly strong honey scent.

The genus Phylica is from the Greek phyllikos meaning leafy, which refers to the densely leafy stems. The species name ericoides means resembling the genus Erica, commonly known as heaths or heathers – hence the common name.