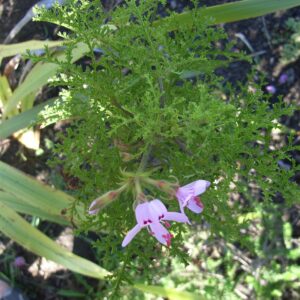 This is a striking sprawling much branched, hairy stemmed perennial shrub which is great as a groundcover. The hairless leaves are in opposite pairs to eachother and deeply divided almost to the midrib but not into separate leaflets. The long stalk (peduncle) bear 3 to 5 flowers each. These flowers have 4 petals each, the upper 2 being larger and having markings on them.

The seed is interesting as per the picture. The feathered, tail-like structure give the seed a twisting motion when flying and causes it to “drill” itself in the ground on landing – giving it a better chance for germination.

The genus Pelargonium gets its name from the fact that the shape its fruit looks like the beak of a stork, pelargos in Greek. The species name multicaule is derived from multi (meaning many in Latin and caulis (meaning stem in Latin) referring to the much branched stems of this species.