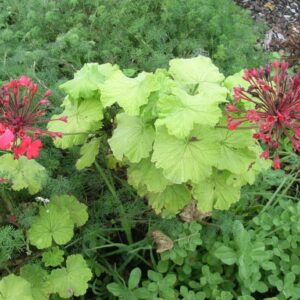 This is a semi-succulent shrub with large round, velvety and hairy leaves. The flower heads are formed by clusters of 5-30 flowers. The upper two petals of each flower are slightly smaller and more upright than the lower three petals which are more evenly spaced.

The genus Pelargonium gets its name from the fact that the shape its fruit looks like the beak of a stork, pelargos in Greek. Inquinans mean stained, referring to the leaves becoming light brown when touched.