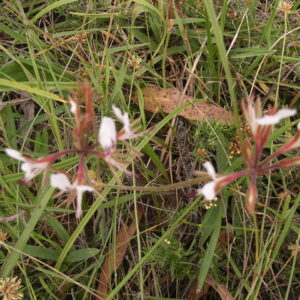 This geophytic (i.e. a plant that propagate by means of underground organs such as bulbs, tubers or corms) herb which only reaches around 35cm in height. Its leaves are in opposite pairs to eachother and deeply divided almost to the midrib but not into separate leaflets. They are hairy and dry at the time of flowering. The pinkish-white inflorescence is carried on branching peduncles (or long stalks).

The genus Pelargonium gets its name from the fact that the shape its fruit looks like the beak of a stork, pelargos in Greek.