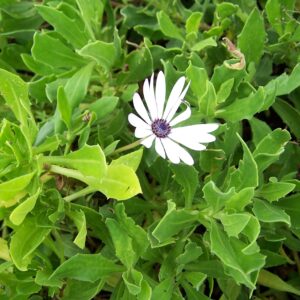 Osteospermum used to belong to the genus Dimophotheca, but only the annual species remain in that genus; the perennials belong to Osteospermum.

This evergreen perennial has sprawling stems that root along their length and form mats. Leathery and minutely toothed leaves can be seen along its margins. The flower heads are purple with white or mauve ray florets.

The scientific name is derived from the Greek osteon (bone) and Latin spermum (seed).