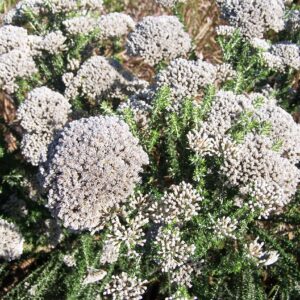 This erect white-woolly shrub grows vigorously on the Northern shores of Leisure Isle and at Bollard Bay. Its leaves are often reflexed, lanceolate to ovate, twisted, 2-15mm long, with axillary tufts. The flowerheads are disc shaped, several in terminal clusters and the bracts are erect or rarely spreading.

The name Metalasia is derived from the Greek Meta which here is interpreted as backwards/reverse and lasios, woolly, referring to the woolly undersides of the leaves; densa meaning closely packed, referring to the flowers.

The main difference between M. densa and M. muricata is that ONLY   M. muricata has scented flowers.