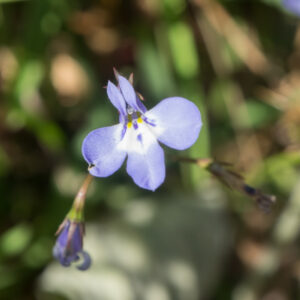 Only 69 species occur in South Africa. The preferred habitat is lower mountain slopes and coastal flats. Distribution ranges from the Bokkeveld Mountains to tropical Africa.

Flower colour ranges from blue, violet, pink or white and mostly with white markings in the centre.

The leaves are alternate, simple, and without stipules, often containing a watery or milky sap.

The flowers are in a loose raceme arrangement  and bisexual. The upper lip consists of two often smaller and erect lobes and the lower lip of three spreading lobes.

The fruit is a capsule, obconical-oblong, 5-8 mm long.

Pollinators include a variety of bees and butterflies.

The flowering time is between September and December.