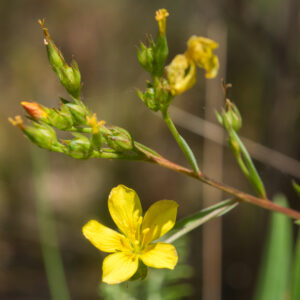 The distribution range of Linum africanum occurs within the Western Cape and the Eastern Cape and also it is an endemic plant in South Africa. The specific range includes from Cape peninsula to Knysna and Gqeberha (Port Elizabeth).   This species prefers to grow in coastal sands and limestone slopes.

This plant is considered to be a hairless perennial plant that arises from a persistent woody rootstock. The structure of the leaf is narrow with a lance-shape feature.  The leaves are considered to be sessile with the presence of a small dark gland at the base.

The flowers have 5 petals that are small and rounded with extended stamens that are joined together in the centre of the flower. The underside of the petals are often a flushed red colour.  Attracts bees, butterflies and other insects.

The Greek word for linum means flax. This word is derived from Greek mythology as it refers to a thread that is spun by the Fates. The Fates — Clotho, Lachesis, and Atropos — were divinities in Greek mythology who presided over human life.