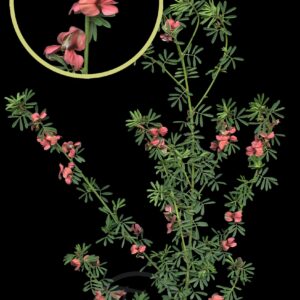 This erect or scrambling resprouting shrub can grow to 1.2m. It has angular stems which are ribbed. The leaves, which are densely hairy beneath are arranged on either side of the stem and carried on small stalks. The dainty little flowers can be seen all along the stems and are almost stalkless.
I. stricta is found in coastal bush and thickets, grasslands, from Mossel Bay to Eastern Cape.