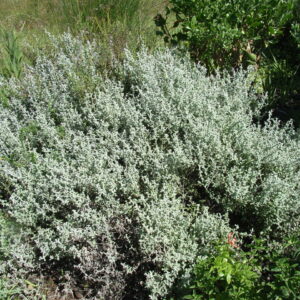 This is a low-growing perennial shrub with grey-green leaves and stems covered with white woolly hairs. The foliage has a pleasant aromatic smell unlike the flowers. The flowers appear in congested, terminal clusters.

The name Helichrysum is derived from the Greek helios meaning sun, and chrysos meaning gold, referring to the bright yellow colour of the flower heads, crispum describe the leaves, which are distinctively crisped, irregularly waved and twisted, kinky or curled.

The Khoi people of the Cape used this aromatic plant as bedding, useful as they discourage insects as well.