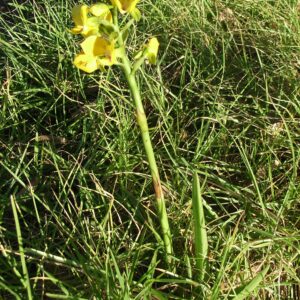 This terrestrial orchid is one of the most common southern African eulphias with fleshy lance-shaped, semi-erect leaves that arise from underground corms.  It can bear up to 30 flowers in a lax unbranched raceme. The flowers are a striking yellow and have red markings on the lip of the side lobes.

Widely found on northern shores of Leisure Isle (particularly at the Creek).

All orchids are protected by law in South Africa, and most not be removed from the wild without a permit, only nursery-grown plants can be cultivated legally.