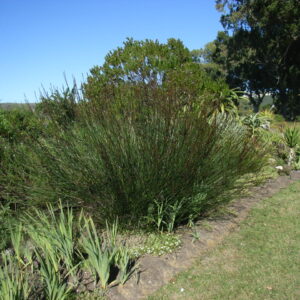 This restio has an upright, symmetrical, tufted reed-like appearance with thin, dark green stems topped with dark brown flowers. Like all members of the Restio family, the male and female flowers appear on separate plants.

Grows well in seasonal marshes and in deep sands in both the western and eastern Cape. It was one of the main thatching reeds used during the occupation of the western Cape by the Dutch East India Company. Today most thatching is done with Thamnochortus insignis.

This species was previously known as Chondropetalum tectorum. Due to recent DNA testing, it was shown that all the species of Chondropetalum actually belong in the genus Elegia.