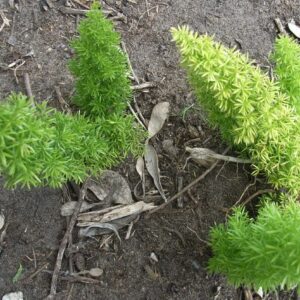 Not indigenous to the Garden Route but found naturally from Eastern Cape to Mozambique.
It is a beautifully erect plant with cylindrical branches which are slightly curved at their tips (looking like a cat’s tail), and densely covered in bright green, short, needle-like leaves.
The flowers, white, star-shaped and fragrant, appear in elongate inflorescences and are followed or even sometimes accompanied by showy red berries.