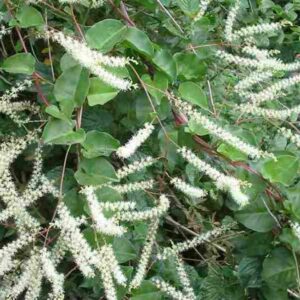 Madeira vine is a long-lived  twining or climbing plant,  the stems are hairless and grow in a twining fashion. Younger stems are green or reddish in colour and round in cross-section. Spreads by large numbers of specialised aerial tubers that are produced along the stems. It also spreads vegetative by tuberous roots and creeping underground stems (rhizomes). Is highly invasive weed and is capable of smothering and destroying indigenous vegetation. The climbing stems can envelop the canopy layer, while it’s trailing stems also smother the ground layer of invaded habitats. This reduces light penetration, eventually killing the plants underneath and preventing the germination and regeneration of native plants. Currently being dealt with in Kingfisher Creek, however it is a long term process as it is very difficult to eradicate.