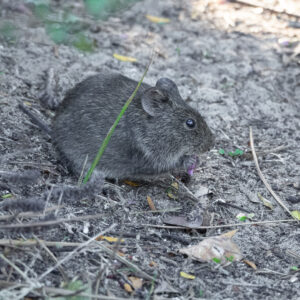 The Common Vlei Rat is a blunt-nosed rodent with dense and continuously replaced shaggy hair and rather a short tail.  They are named because of their association with damp vleis or marshes, and inhabit areas consisting primarily of lush grasses, sedges, and herbaceous vegetation associated with wet soil and sometimes shallow, standing water near rivers, streams and vleis.

They are very shy, greatly disturbed by noise and movement, and they seldom take to the water unless retreating from a predator.  Owls, eagles, snakes, domestic dogs and small carnivores prey on this species.

Vlei rats readily die from loss of body heat when they become wet, and their activity during heavy rainfall is greatly reduced. Tail-shivering is associated with a high state of excitement, and occurs during conflict situations. This behaviour is primarily demonstrated by dominant individuals, and also serves as a threat display.

Occasionally vlei rats take over the burrow of another species, but more usually they build their own nests above the high water level on the banks of streams or rivers, or on the edges of swamplands. The nest consists of shredded vegetation placed directly on top of the ground, protected by a natural canopy of vegetation.   A typical nest is open, shallow, and bowl-like. It appears that these nests are easily made and may only be temporary.

Plants plays a significant role in the vlei rat’s life, both for protection and also a food source, as vlei rats are strictly vegetarian. Mariscus congestus, Juncus capensis and Juncus kraussii are the most favoured food plants of the vlei rats in Steenbok Nature Reserve.

When feeding upon grasses, the vlei rat bites through the stem close to the ground, picks up the cut pieces in its mouth, sits back on its haunches, grasps the grass on either side of its mouth with its paws, and then grinds the cut grass with its molars. If the grass is coarse it moves the piece back and forth through its mouth from one end to the other, stripping off the outer layer to get at the tender pith. Tell-tale piles of plant cuttings are left along runways, some of which are the result of attempts to get at and eat the tender upper parts of the vegetation.

The juveniles appear at the beginning and at the end of the breeding season, which lasts from August until May.  The number of offspring per litter is small (on average 2 to 3). The young are precocial at birth and are prominent nipple-clingers. This ensures they have a better chance of survival because they are soon able to fend for themselves and are not dependent upon the mother for a long period of time.

The lifespan of a vlei rat is around two years. They are commonly found in the Western Cape.