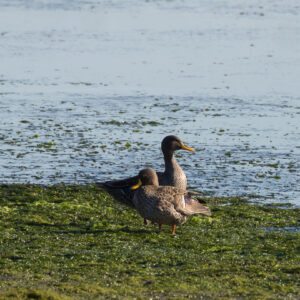 Probably the commonest duck in Southern Africa and easy to identify by its vivid yellow bill with black upper ridge. In flight the distinctive patch of emerald green edged with white on its wings is clearly visible.

This medium-sized grey-brown duck is commonly seen at Woodbourne but also off the northern shore of Steenbok park at low tide. It feeds mainly on plant matter in the early morning or late afternoon by dabbling, immersing its head and upending in shallow water.

The call of the male is a rasping hiss or whistle, while the female quacks.