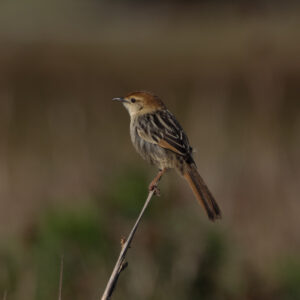 This small bird with its russet forehead, crown and nape, and its back heavily streaked with black, can be seen flitting amongst the reeds along the northern shore of Steenbok Nature Reserve. It has a distinctive low, floppy flight during which it jerks its tail, while hunting insects like small grasshoppers and beetles, ants, moths and caterpillars.

When disturbed, it perches on the tallest reed to keep an eye on any intruder, and makes a loud alarm call – ‘tee-tee-tee’. Its nest is usually hidden in thick grass bordering on a vlei or wetland. The call during the breeding season (eggs are laid from August-October) starts with a soft ‘chee-chee’ and then swells into a loud warbling ‘cher-rueee’.